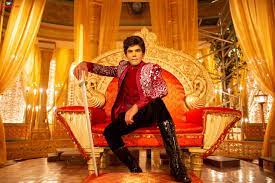 Science and Cinema gets showcased on the screen blended with the right measure of commercial ingredients thrown in at appropriate places in abundant measure account for this entertainer that has a running time which is just about less than 3 hours!

Legend Arul Saravanan makes a dramatic entry into films and does all what a regular commercial hero would do on a screen.

He plays a scientist who wants to find a cure for diabetes but the pharmaceutical mafia wouldn’t let him do that!

The Legend (the title reminding the viewers of a Jet Li starrer!) fully decked up with designer costumes (for that matter almost all in the cast are flashily dressed up!) goes up in conventional heroic style but to no big avail!

The leading ladies too do not create a flutter.

Late comedian Vivekh deserves a better that the role that he has enacted here!

The film’s suspense element regarding the killing of the first leading lady is unexpected yet admirable!

The music of Harris Jayaraj manages to pass muster.

The directorial duo, J.D.-Jerry have tried their possible best to present this flick as plausible as possible.