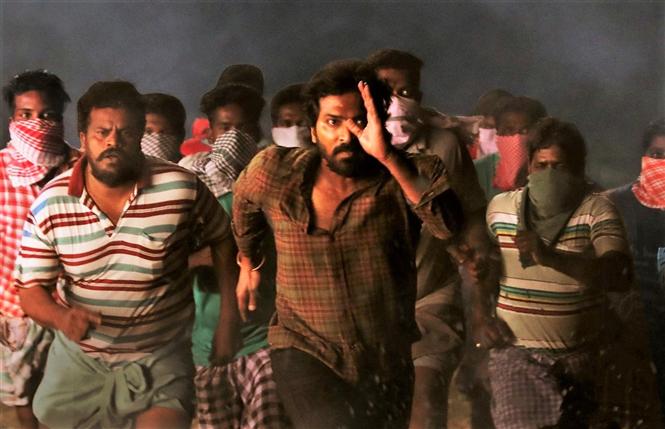 Though this is his debut vehicle, Ashok Veerappan gets off to a good start with this thriller punctuated by action, thrills, humour and romance to a brief extent that is subtly portrayed!

It is a breakthrough role for Vaibhav who knows the knack of getting into the skin of the characters that he gets to enact, regardless of whether how big or small it is!

Athangudi Ilaiyaraja is a fine addition to the main cast, at least in the earlier portions! His spontaneity is mention worthy.

Another fine point of this thriller with a lot of twists is the amazing camera work of Dinesh Purushothaman whose top angle shots are breathtakingly beautiful!

Though there is nothing much to write about the score of Santhosh Narayanan, his BGM deserves mention.

A pair of village artistes-Kumaran (Vaibhav) and Muthaiya (Athangudi Ilaiyaraja)- performing traditional arts inadvertently gets involved in a smuggling racket! As time unfolds, they are deeply drawn in into the web and it looks like they have reached a point of no return!

The identity of a gangster named Dhanapal remains suspense till the climax, that which has been handled interestingly by the debutante filmmaker.  Anagha playing a Sri Lankan refugee looks good but the lip sync gives it all away!

A genuine attempt at his very first attempt by a first time filmmaker!

‘RUMOR’ ROOTED THROUGH A SPECIAL SCREENING!